Amherst College President Biddy Martin speaks to alumni. (Click image for video of her full remarks and the Q&A session. The Yamins-Martin exchange is from 25:00 to 32:00.)

Yamins noted that several alumni have asked for a public statement from the college that Arkes’s views “are inconsistent with the values and stated policies of Amherst College.”

Martin replied, referring to a blog post that she wrote, “I think my statement does that. … It makes it explicit that Amherst’s values are at odds with the positions that Prof. Arkes took.”

Yamins called for a more public statement than a personal blog, to which Martin replied, in part: “It’s not appropriate for a president to go public with some kind of debate with one of the faculty members.”

Here is a transcript of the questions from Yamins and the answers from Martin:

YAMINS: Biddy, thank you for your remarks and also for your blog of a couple of weeks ago which attempts to respond to the controversy surrounding Prof. Arkes.  However it seems to me … your blog was principally a defense of the important value of academic freedom, which I think everybody agrees with.

However, as I understand it, it didn’t address the issues that were actually put to you by the alumni in question.  Those alumni did not ask that he not be allowed to express his views or that the College condemn or denounce those views.  They asked for a statement along the lines of what Johns Hopkins made with regard to Ben Carson, a statement which, on the contrary, affirms his academic freedom to express himself however he wishes and whatever his views are, but asked [sic] for a public statement that those views are inconsistent with the values and stated policies of Amherst College.

Those policies require the “respect for all the rights, dignity, and integrity of others” and states that the lack of such respect “is damaging to Amherst College.”

Can you explain precisely  how such a statement would impinge on Prof. Arkes’ academic freedom in the slightest?

I talk about the college’s commitment to respect for persons. I talk about the support of our queer community, which is strong.
I talk about, in my earlier responses to the Class of ’70 — a group of members of the Class of ’70’s requests for such a statement about having talked with our students to make sure that those students who would be most affected feel the way that I felt about defending academic freedom.

So I perhaps did not succeed, which is always the risk in doing anything, I suppose. But I thought the piece I wrote showed balance, that is that Amherst College stands for respect for persons, it opposes homophobia, it supports a vibrant queer community on campus. And I think my reputation precedes and follows me, one could even say on these issues.

My wording was not the same as the wording in the Johns Hopkins statement, but that statement was also released at a different point in the history of that incident.

It’s also true, I think, that the faculty member at Hopkins who made those comments was a public figure of a different sort, but I don’t want to get into all the contextual issues. I really feel strongly that the college has taken a position that is the right position to have taken, and that our support for our gay and lesbian, transgender students, faculty and staff is established, well established, on the campus and beyond. If I didn’t think that, I would be even more aggressive in my pronouncements. 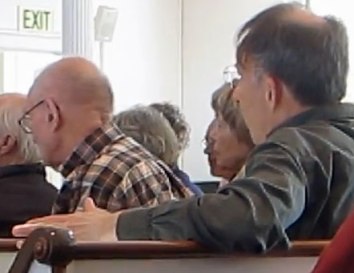 YAMINS: May I have just one quick follow-up? We’re all happy to hear about the support for gay and lesbian students here.  We applaud that.  But again, that also is not really  the issue. The issue that brought this on was his effect beyond the campus.   Among other things … just to keep this brief … one difference between your statement and theirs is, their statement was public and Amherst’s was not.  This was your personal blog, which really is not going to reach the larger community that Prof. Arkes affects. He is read nationally, he has provided intellectual fodder for some very hateful and damaging things.  So that’s one major difference between your blog and their statement. [a few inaudible words here]

I would hope at least … if we can find some common ground that … you ended your blog with:   we need to foster critical dialogue about the difficult issues in our society.   I hope we can agree that this is one of those critical issues, both for Amherst and for society, and that this dialogue needs continue, and not be kind of “OK, we’re done, let’s move on,” which is the impression that some people have gotten from your blog.

MARTIN: The issues are extraordinarily important. It’s good that they have been raised. Neither the issue of academic freedom nor of homophobia and advocacy for gay rights are going to go away as issues. And, again, I have a long history of advocacy on these issues.

As president of this institution, I think that the statement I made is the right position for the institution, and I’m sticking with it. That doesn’t mean that I will never again speak about gay rights publicly. I’ve done it most of my life, actually, over many decades, and taken quite a few risks to do so.

So I don’t think anyone needs to worry that I’m (A) afraid or (B) reluctant to advocate for the rights not only of our students, staff and faculty here on campus but for the rights of people everywhere. I think I have a strong record there.

But it’s not appropriate for a president to go public with some kind of debate with one of the faculty members. I don’t think that’s appropriate and I won’t do it.