Tito Craige ’70, commented on the writings of Prof. Hadley Arkes for The Amherst Student. Excerpts below:

As an older alumnus, I guess I should be musing about the good old days at Amherst and making payments on a cemetery plot, but, honestly, I find myself distracted about something that I have to get off my chest. It bothers me so much that, for the first time in my life, I have written something for The Student.

You see, I get angry when I read that Professor Hadley Arkes compares same-sex marriage to bestiality. To be honest, I don’t like a whole bunch of things that Arkes has written and then he makes things worse by attaching “Ney Professor of Jurisprudence at Amherst College” to his name. Arkes’s words are circulated nationally and they affect people I care about. For my sister, her partner of 30 years and their daughter, I need to stand up. For the gay students in my high school’s Queer Club, I need to stand. For my gay Amherst classmates, I need to stand. Until now, many have been silent about Arkes’s words, and now I think it is time to speak. 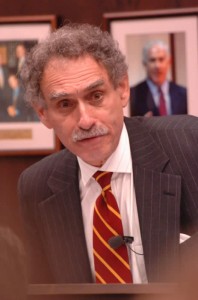 Imagine if you were a gay teenager and you read the following lies about death and conversions: “Do liberals want to break through conventions with ‘sex education’? Then education it should be: The life-shortening hazards of homosexual behavior should be conveyed, along with information about the other hazards of incautious sex; the record of conversions from homosexual life should be put in texts along with the inconclusive arguments over the ‘gay gene.’” (Arkes in The Weekly Standard, May 23, 2005)

Some of Arkes’s earlier contentions are just plain ridiculous. Here is an assertion he made in 1986, but it is still paraphrased by politicians: “… the number of pregnancies resulting from rape in this country is miniscule … (since) … the fear induced by rape may interrupt the normal operation of hormones in the body of the woman which in turn may prevent ovulation and conception.” (Arkes, “First Things: An Inquiry into First Principles of Morals and Justice,” 1986.)

I defend Arkes’s right to speak and I reject censorship. However, his comments that are racist, sexist or hateful should be criticized. If the writings are damaging to the College, then let’s say so. If Amherst stands for something better than bigotry, then it needs to separate itself from Arkes’s destructive claims. Amherst’s motto is Terras Irradient. Let us cast the light of truth on dark words.

Tito Craige (etacraige@mindspring.com) is a retired history teacher from North Carolina. In mid-career, he quit teaching so as to investigate massacres of civilians for the Ecumenical Movement for Justice and Peace in the Philippines. Four years ago, he wrote about ecology v. tourism for the Darwin Station in the Galapagos. On Sept. 13 he and five of his classmates met with President Martin concerning the writings of Hadley Arkes.

For more information, read the full text of the commentary.